The Soviet Union developed several nootropics or “smart drugs.” Most of these drugs were legalized as prescription drugs in Russia, and some are still being used to date. Most of them are not legal outside Russia, but they are still available to buy as either research compounds or dietary supplements. Another problem with most of these drugs is that the scientific evidence on them is minimal.
Bromantane is one of such drugs. It was widely used by the military and sportsmen in the 1980s. The army stopped using it, but it’s still popular in the sports and athletic performance niche. You should know that the nootropic is banned in professional sports competitions like the Olympics. 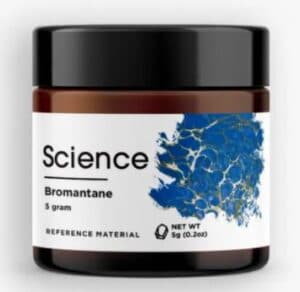 Bromantane is an actoprotector derived from adamantine. It is also known by the names Bromantan and Ladasten. As an actoprotector, this drug improves your physical activities in extreme situations. Studies suggest that it increases both mental and physical activities, explaining why the drug is popular in sports medicine and as a nootropic.
According to Russian reports, Bromantane is also effective as an anxiolytic, i.e., it combats anxiety. Additionally, it improves learning ability, movement coordination, and inhibits fatigue.
In Russia, this drug is used to treat neurasthenia, a condition characterized by fatigue, headaches, irritability, sleep disturbance, and lassitude.

How Does It Work?

Several working mechanisms have been suggested, but we still don’t fully understand how this drug works. According to multiple studies, Bromantane acts on the dopamine system. It increases decarboxylase and tyrosine hydroxylase, which increases the formation of dopamine. This promotes wakefulness and mental alertness. The drug also boosts serotonin levels, which increases the feelings of happiness, well-being, and mood.
Rodent studies also show that Bromantane increases: HIF1A, which increases the body’s ability to cope in low oxygen levels; SAA, which can decrease the risk of developing Alzheimer’s disease; and ADRI (alcohol dehydrogenase) that boosts alcohol recovery. It’s unclear whether the same results can be observed in humans.
In general, it’s believed that Bromantane increases brain activity in the hypothalamus nuclei, reticular nuclei of the operculum, and the hippocampus.

Benefits and Uses of Bromantane

Neurasthenia is a medical condition that causes headaches, fatigue, mental weariness, insomnia, muscle aches, hypersomnia, and irritability. Multiple studies have demonstrated Bromantane’s effectiveness in dealing with this condition.
In this trial involving just over 700 patients with psychoautonomic syndrome and asthenic disorders, Bromantane was used in dosages of between 50 to 100mg per day for 28 days. The researchers observed significant improvements after just 3 days, and the effects were still present a month after the therapy was stopped. The scientists concluded that It is very beneficial as an antiasthenic, anxiolytic, and stabilizing the autonomic nervous system. It also boosts the quality of life. What’s even more interesting is that the patients did not experience any adverse reactions throughout the study period.
It is already being used to treat Neurasthenia in Russia. However, in other countries where the drug is not legal, you’ll need to consult a physician and discuss your options.

Many people buying Bromantane as a research chemical use it to boost key brain functions. Studies show it can increase productivity, attention, motor performance, vigilance, alertness, and wakefulness. Rodent trials also suggest that Bromantane can improve planning abilities, short-term memory, and motivation.
There is clearly not enough scientific evidence to prove Bromantane is as powerful a cognitive booster as some people claim. There have also been reports that in high dosages, it can block acetylcholine pathways, which would affect your brain performance. With this in mind, it’s vital to use it very carefully.

Russian athletes used Bromantane in the 1980s due to its ability to boost physical performance. The drug was clearly effective, which would explain why it ended up getting banned in the Olympics and other professional competitive sports.
According to several animal studies, it increases adrenaline and noradrenaline effects in the body by keeping the hormones in the blood.
In addition to the above effects, there are also some limited studies showing it can be effective for:

Bromantane has not been reported to cause any severe adverse reactions when used correctly. In some rare cases, high doses of Bromantane may lead to fatigue, brain fog, irritability, nausea, and some symptoms of depression. It also caused diarrhea and some stomach issues in animal studies, so it’s possible that the same could happen to humans.
The lack of exhaustive clinical trials on this drug is also a safety concern. Bromantane may have some long-term effects that are yet to be identified. For this reason, we encourage you to use the drug very carefully. Use the recommended dosages and do not take it for too long.
There is no evidence suggesting it can cause addiction and withdrawal symptoms.

Individuals taking other drugs for a different condition should avoid using Bromantane until a licensed physician clears them.

The ideal dosage ranges from 50 to 100mg per day. Bear in mind these are not official dosages because the drug is not approved by the FDA. The doses are based on anecdotal experiences and limited clinical trials. For that reason, many users have to experiment over time to find the ideal dosage that works for their unique situation. Start with 50mg per day and increase the dosage gradually while monitoring your performance. You should stick to the dose that’s producing the best results without any adverse reactions.

Where to Buy Bromantane?

You can find Bromantane for sale in stores such as Science Bio, which specializes in research chemicals. It’s imperative to buy this drug from these reputable stores where quality and purity is guaranteed. Science Bio also has some other really good smart drugs which you may want to check out before placing your order for the product.

The 3 Best Nootropics For Dementia To Buy in 2021