Centrophenoxine is a cholinergic nootropic widely used as a dietary supplement for boosting brain performance. As a cholinergic compound, this drug supports choline activities and increases acetylcholine, an essential neurotransmitter responsible for learning, memory, and other brain functions.

Centrophenoxine was developed in the late 1950s at the French National Scientific Research Center. It was made for treating Alzheimer’s disease, a neurodegenerative condition characterized by declining cognitive functions. Research showed Centrophenoxine is quite effective at reversing the symptoms of Alzheimer’s. This hinted at the possibility of the drug being used as a cognitive booster even by healthy adults. 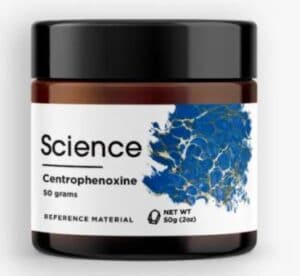 How Does Centrophenoxine Work?

Centrophenoxine is made up of two chemicals, Dimethyl-aminoethanol (DMAE) and Para-chlorphenoxyacetic acid (pCPA). DMAE is a good source of choline, which makes it very beneficial to the body. Sadly, DMAE cannot cross the blood-brain barrier on its own. The structure of Centrophenoxine helps to fix this issue. Once you ingest the drug, it is broken down into DMAE and pCPA in the liver.
Studies have suggested multiple working mechanisms that make Centrophenoxine the useful drug it is.

Centrophenoxine also supports efficient blood flow in the brain. It improves the oxygenation and nourishment of the brain cells. This helps people experiencing cognitive impairment and other issues linked to insufficient blood flow in the brain. Centrophenoxine also promotes glucose uptake, which boosts your energy levels.
Several trials have identified Centrophenoxine as a powerful neuro-protectant on an aging brain. It protects the nerves and brain cells against oxidative stress. It also boosts RNA production, which improves protein turnover in the neurons.

Bear in mind that most of the benefits linked to Centrophenoxine are based on relatively limited studies, which means we don’t know the full scale of both the efficacy and safety of using it.
Here are some of the Centrophenoxine benefits as reported by the users and a few trials:

In this study involving old rats, Centrophenoxine was observed to be effective in boosting synaptic plasticity. This improved intelligence and learning.
Several trials – including some small-scale ones done on humans – also showed that Centrophenoxine could boost long-term memory formation, storage, and recall. It also improved mental alertness dramatically.
The good thing about these studies is they show the potential benefits of using Centropehnoxine in treating cognitive decline caused by aging and conditions such as Alzheimer’s. This makes it a very promising dementia treatment option. On the flip side, since the studies are limited to old subjects with dementia, it’s impossible to tell whether the same results can be observed in healthy adults.

In several animal studies, researchers reported that Centorphenoxine had a dramatic anti-anxiety effect on rats exposed to stressful situations. It’s believed that Centrophenoxine produces this effect due to the presence of DMAE. Some people even claim that it can go as far as improving your motivation, easing depression, and boosting the feeling of overall well-being. Sadly, no human trials support the same. All the evidence we have so far is based on animal trials and anecdotal experiences.

Centrophenoxine has some antioxidant properties that protect the brain cells and neurons against oxidative stress caused by free radicals. It achieves this by boosting the body’s antioxidant defenses, i.e., it promotes glutathione and superoxide dismutase activities, enzymes that fight oxidative stress. It’s also effective in flushing out toxins and repairing damaged cells.
Centrophenoxine may also protect the nerve cells against damage caused by stroke and other brain injuries.
The issue with Centrophenoxine, and most other nootropics, for that matter, is the lack of enough human trials. This is why you need to control your expectations and use the drug carefully. For people with Alzheimer’s disease and other types of dementia, the smartest approach is to consult a medical practitioner for possible alternatives before using these dietary supplements.

Centrophenoxine is possibly safe when taken correctly.
Some users may experience adverse reactions like nausea, gastrointestinal issues, headaches, and insomnia. This is especially common in people using the drug in high dosages.
Before using Centrophenoxine, make sure to discuss your medical history with a licensed physician. Do not forget to point out any drugs or supplements you could be using because Centrophenoxine can also have some negative drug interactions.
Pregnant and nursing mothers should avoid Centrophenoxine.

The ideal Centrophenoxine dosage ranges from 250 to 1000mg per day. Some people take more than 1000mg due to increased tolerance. Such high dosages increase the risk of side effects. For first timer users, 250mg per day split into two servings is more than enough. You can stick to that dose for a few days and then increase it slightly as you monitor your reactions.
The above dosages are recommended for healthy people using Centrophenoxine as a cognitive booster. Anyone else looking to use it for treating medical conditions like Alzheimer’s should consult a physician for a more accurate dosage guideline.

The 3 Best Nootropics For Dementia To Buy in 2021