Home SARMS Research What Is Trenbolone and What Is It Used For?
Facebook
Twitter
Pinterest
WhatsApp
There are a multitude of ways for athletes and bodybuilders to build muscle mass. Some people opt for more natural methods such as maximizing their own body’s testosterone production to gain muscle; however, it’s not uncommon to achieve sub-par results or for these methods to be extremely difficult to maintain, which is why the use of steroids is often used as a simpler alternative.

One of the most powerful steroids available is trenbolone. It is considered to be the most effective means by which people can gain extremely lean muscle at an accelerated pace. Due to its ability to get desired results quickly, the steroid is a very popular option for bodybuilders, but it unfortunately has many side effects which can make its use potentially hazardous and, in some cases, debilitating.

Trenbolone is a steroid that has both androgenic and anabolic effects on the bodies of mammals. Its use results in the development or promotion of secondary masculine sex characteristics, primarily the increased production of muscle tissue, although this has the effect of also increasing appetite. The mainstream use of the steroid is usually relegated to the livestock industry where it’s often administered to cattle to increase their overall weight and muscle mass. 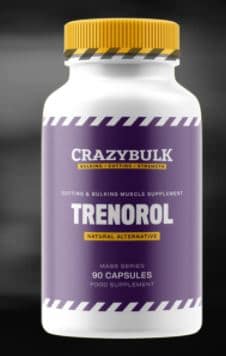 Trenbolone works by increasing protein synthesis by encouraging muscles to uptake more ammonia ions. It simultaneously decreases the rate of catabolism, which is the process by which the molecules in food are broken down to later be absorbed by the body. This is the primary factor behind the uptick in appetite, which allows for the buildup of nutrients necessary to accommodate fast-paced muscle growth.

The steroid has the additional effect of binding to progesterone and glucocorticoid receptors, which can result in substantial hormonal changes.

Due to its relatively short half-life, trenbolone is combined with esters to create a method of slower distribution throughout the body, which ultimately amplifies the steroid’s effects. There are three different ester conjugates that are used to administer trenbolone:

What Are the Benefits of Taking It?

Considered to be the king of all steroids among many people in the bodybuilding community, trenbolone can yield results far greater than most other options for building muscle, especially if paired with other anabolic drugs (stacking). It’s scientifically designed to be 3 to 5 times stronger than testosterone alone and the dosing is generally minimal, with not a lot of it being required to work properly.

Due to its extreme effects, it’s not uncommon for users of the drug to obtain their desired physical results within less than a year, or roughly 2 to 3 cycles. Users swear by its ability to amplify the effects of other steroids taken in combination with it and how it can cause muscle gains to skyrocket unlike any other substance. Its use also coincides with a noticeable decrease in body fat, ultimately resulting in a bulky, toned, and lean physique.

The drug’s suppression of glucocorticoid in the body also allowed for more frequent workout sessions. As too much glucocorticoid is associated with wound healing issues, weak muscles, and a reduction in the calcium absorption of bones, its reduction throughout the body makes muscle repair much quicker and more effective.

In addition, the steroid’s use has been associated with the following changes:

Who Takes the Drug?

Most users of trenbolone are bodybuilders in their 20s or 30s looking to develop substantial muscle gain within a short period of time. Due to the implications of steroid use during athletic competitions, most users of the drug are not professional athletes, although recent years have seen a tremendous increase in the number of athletes who opt for using the steroid due to its almost unparalleled ability to enhance workouts.

The steroid is also sometimes used in a research setting to see the overall effects of anabolic drugs on the human body.

What Are the Side Effects?

While the steroid does have the capacity to exponentially increase muscle gain, there are many side effects which can have drastic repercussions. Most forms of the drug have never been approved for human use and the one that has was only on the market for a couple years due to its side effects being deemed too high risk. Here is a list of potential issues that might arise as a result of using trenbolone:

Most accurate dosing information is limited to use in livestock, usually cattle. Users have a tendency to underestimate the potency of the steroid, so end using much more than is necessary. How much intake is appropriate is very much up for debate and heavily depends on what kind of ester is being used.

Trenbolone is relatively short acting, so it will require frequent use (usually everyday or every other day), in amounts ranging between 50 and 100 mg, although for more intense muscle gain, it might be necessary to take between 300 and 400 mg. However, it should be noted that appropriate dosing will vary considerably from person to person.