Eugeroics are a class of drugs that increase wakefulness and alertness. Some of these drugs are medically used for treating sleep disorders caused by narcolepsy, obstructive sleep apnea, and other conditions.
Eugeroics have also grown popular as dietary supplements. Here, people use these drugs to increase their mental alertness and wakefulness for the purposes of boosting their productivity in a professional setting or at school.
While some of these drugs have scientific evidence supporting their efficacy, most do not have extensive human trials backing their effectiveness and safety. It’s therefore very important to choose wisely.

Hydrafinil is one of the popular Eugeroics available on the market today. 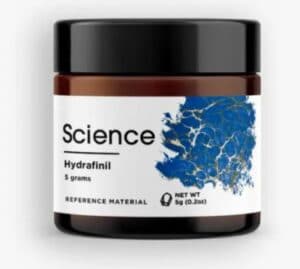 Hydrafinil is a metabolite of Modafinil. It is also known by the names Fluorenol and 9-Fluorenol. Both Hydrafinil and Modafinil are used as eugeroics, but they have slightly different structures and working mechanisms. Hydrafinil is said to be 39% more potent than Modafinil. It is also less addictive. This naturally makes Hydrafinil a more popular option than Modafinil. What seals the deal for most people is the fact that Hydrafinil is a lot cheaper than Modafinil.
9-Fluorenol is usually sold as a nootropic or “smart drug” due to its ability to increases cognitive functions like concentration and focus. Students report that Hydrafinil improves their ability to study, while professionals like shift workers explain that it boosts their alertness and reduces the risk of making errors.

Hydrafinil affects your brain in several ways. According to some trials, the compound inhibits dopamine reuptake hence increasing dopamine concentrations. Increased dopamine improves some cognitive functions as well as your mood.
Hydrafinil also boosts dopamine concentrations by acting as a 5-HT6 receptor antagonist. Other than boosting dopamine levels, 5-HT6 receptor antagonism also increases neurotransmitters like glutamate and norepinephrine. Glutamate plays a vital role in memory formation and retrieval. Norepinephrine, on the other hand, promotes alertness, energy, and mood. Hydrafinil also increases choline levels, which supports the production of the learning neurotransmitter called acetylcholine.

Some reports also show that Hydrafinil regulates circadian rhythm and sleep cycles by increasing histamine levels.
Additional human trials are necessary to fully understand how exactly Hydrafinil works. These will also help to determine the potential long-term effects of using the drug.
Uses and Benefits of Hydrafinil
Some of the potential benefits of taking Hydrafinil are:

All eugeroics are known for boosting alertness and wakefulness. That’s why they are also known as wakefulness-promoting agents. Hydrafinil, just like Adrafinil, Modafinil, and other drugs in this family, is also very effective at promoting wakefulness and mental alertness. Although the working mechanism of the drug is not 100% understood, scientists believe that it achieves this by acting as a dopamine reuptake inhibitor.
The beauty of using Eugeroics like Hydrafinil for this purpose is it rarely causes adverse reactions that are synonymous with stimulants and amphetamines. Hydrafinil also has a fairly short half-life meaning it will keep you awake only when you need it to, so it won’t affect your ability to fall asleep later in the day.

Hydrafinil acts as a 5HT6 receptor antagonist to increase the concentration of key learning neurotransmitters like acetylcholine and glutamate. These neurotransmitters will boost your memory, learning ability, and overall cognition.
The ability of Hydrafinil to boost cognition explains why some people prefer it over traditional stimulants. It also explains its popularity as a nootropic among students.
Bear in mind that this is based on preliminary studies, most of which are done on animals and not human subjects.

Hydrafinil can also improve your motivation and mood. The compound increases neurotransmitters like glutamate and dopamine, which play a pivotal role in motivation and mood enhancement. It also supports learning, blood vessel functions, and attention.
Having a decent mood and high motivation alongside increased alertness is crucial for maintaining high productivity.

Hydrafinil has been linked to a number of side effects, including:• Nausea
• Headaches
• Mild crash
• Anxiety
• Nervousness

The good news is these side effects are very rare, and they appear to be linked to excessive usage of the drug. Therefore, you can reduce the risk of experiencing adverse reactions by following the recommended dosage.
The limited clinical research on the drug also leaves some unanswered questions on the possible long-term effects of using it. We encourage you to consult a licensed physician before taking Hydrafinil, especially if you have an existing medical condition.
Dosage
There is no official Hydrafinil dosage, but most people find 50mg to be the perfect sweet spot, i.e., it produces the desired effects without any complications or adverse reactions.
Hydrafinil has a half-life of about 7 hours. If you want the effects to last longer, you’ll need to take the drug twice or thrice in a day, meaning you’ll be using a total of 100mg or 150mg.
Note that the higher the dosage, the higher the risk of adverse reactions. Do not take more than 150mg in a single day.
How does Hydrafinil compare to other similar eugeroics?
Here is a quick comparison between Hydrafinil and two other popular eugeroics:

Modafinil is the most studied of the three drugs. It is sold under the brand name Provigil Modafinil is approved by the FDA for treating excessive sleepiness caused by obstructive sleep apnea, narcolepsy, and shift-work sleep disorder.
Modafinil has a stronger impact than Hydrafinil on dopamine reuptake inhibition. Hydrafinil, on the other hand, is generally stronger than Modafinil as a eugeroic. Data shows that it is up to 39% more potent. It also has a milder crash.
What does this mean? Well, Hydrafinil is theoretically a better option than Modafinil because it is more potent and with a milder crash. It’s also way cheaper. However, human trials on Hydrafinil are very limited. Therefore, Modafinil is the smarter choice despite the high price tag.

What about Adrafinil? There isn’t much to separate Hydrafinil and Adrafinil. Both of them retail at roughly the same price. Most users also report that the effects are more or less the same. However, Adrafinil is slightly more studied than Hydrafinil, so users have a better understanding of its efficacy and safety.
Generally speaking, Modafinil is the better choice of the three simply because it’s extensively studied, which gives it a better efficacy and safety profile.

Hydrafinil is a decent eugeroic and nootropic despite the lack of sufficient human trials. It’s also cheaper than the popular Modafinil. That said, you should use it very carefully to avoid unnecessary complications. Stop using the drug and seek medical help immediately in case you experience any severe side effects.